Want updates when there is a new article? Enter your email here.

Sake; Not just with Sushi

This class was good for me in many ways.  It made me a novice again for one.  I like Sake, don't get me wrong.  I even once listened to a podcast with an expert talking about Koji rice, and how it is added to a wort like liquid and they make rice wine from a mold called Aspergillus.

When I went to a Japanese restaurant, I would even frequently order some Sake.  How?  I would close my eyes and point to a bottle that was in a price range I liked, and presto, some sake would show up at my table.  The beautiful carafe, the cute little shot glass, or sometimes, the wooden box.  It is always exciting.  On occasion, I would actually make a good pick and really enjoy my experience.  The banana, the yeasty, champagne like nose, the jasmine flower.  Sometimes it will have been aged and give some caramel notes.  More often than not however, it is a nondescript, subtle, non-offensive drink.  It matches and supports the sushi, but it left no lasting memory of itself after the meal.  I rarely if ever asked, "What was the name of that sake again?"  And yet, I continued to order more.  Why?  I couldn't tell you.  Other wines pair famously with sushi.  Riesling, Sparkling, Grunner (I think it pairs with everything).  Dry Japanese beer works well too, and is one of the few beer categories I actually LOVE.  (Oddly the other is stouts and porters which bear no resemblance to the Japanese beers at all)

Perhaps sake is just like peanut butter and jelly.  It just goes with my sushi and just... belongs there.  Perhaps it was the tradition.  Perhaps there is something in its subtlety that continued to intrigue me.  I am not sure.  What I do know is that there are years of tradition behind the beverage.  People dedicate their lives to making it well, tasting it well, pairing it well.  It is wine after all.  Not grape wine, but rice wine.  It comes from an ancient society, with ancient rituals, and sake has been a part of some of those rituals for centuries.

The history of Sake began in 700 AD in Japan making it one of the oldest alcoholic drinks on the planet perhaps only slightly behind beer and wine.  True Sake, and there are posers out there believe me, is made from 3 ingredients.  Water (Special water), Rice, and Koji (A mold made from Aspergillus oryzae).

Sake is produced in a Sake Brewery called a Kura or a Sagakura by a brewer called a Toji.  The rice that is used is not Uncle Ben's Rice either.  They use special long grain, low protein rice called Shuzo Kotekimai, the best of which is Yamada Nishiki rice.  I mentioned earlier that water plays a big role as well.  The Toji chooses water based on the style of Sake he is looking to make.  The harder the water, the dryer the Sake will be in the finished product.  Conversely, the softer, the sweeter.  (Soft=Sweet). 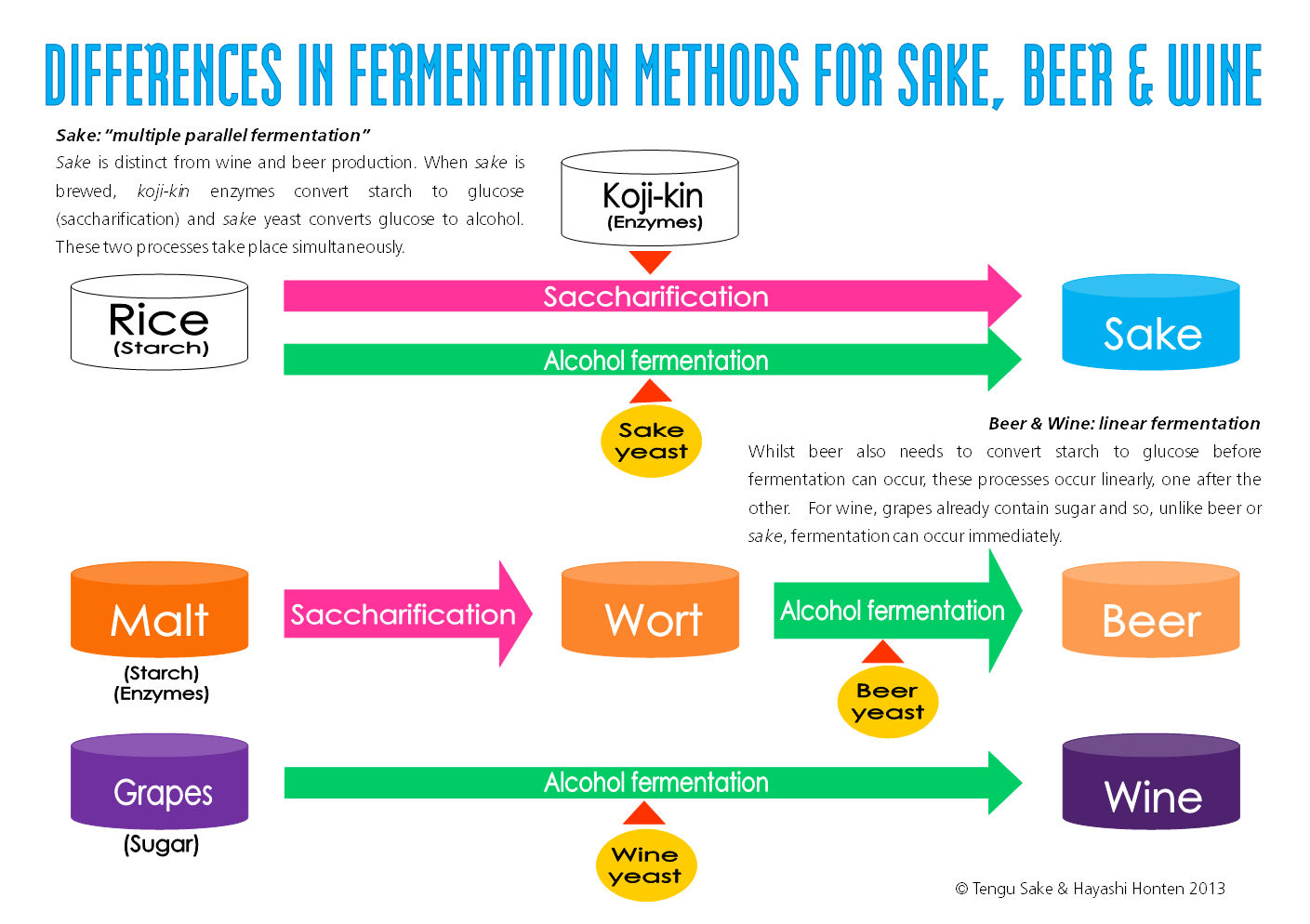 The brewing process for Sake is sort of like beer in that you need to move the sugar out of the grain by heating the liquid converting starch into sugar.  It is unlike beer however in that it is a two step fermentation process.  The polished rice (More on rice polishing later) is cooked, and added, and the yeast and Koji and its enzymes which also help to creat sugar from the rice are added to the mixture.  These two steps are done in parallel.  Yeast is pitched, and converts the sugar to alcohol.

Back to Rice polishing, and I always find this funny.  I picture little guys in a room with a tiny cloth, polishing rice grains one by one.  I am sure that is not the process but that is always what I picture.  The more the rice is polished, the more refined the finished product.  "Ginjo" Sake is a premium Sake that only uses 50-60% of the rice grain, while Daiginjo Sake is a super premium Sake that uses no more than 50%.

Honjozu-shu is more fragrant, generally more earthy, has a longer finish and often is served better warm, although not always.  Junmai is more delicate.  It also tends to have higher acidity and can also be more full bodied.

Nama-Zake is a Draft Sake that is unpasteurized.  It preserves freshness and aroma.  All above sake varieties can be made Nama-Zake style.  Nigori is another unfiltered Sake.  It has a bursting nose by sake standards.  It is white and cloudy from the lees making it into the bottle.

Jizake are small boutique breweries that are not mass produced.  These are often hard to find in the US.  Amakuchi is SWEET sake,...Genshu is higher in alcohol.  Most Sake is watered down to bring alcohol levels down.  Genshu is not.

Another rare type of Sake is Ginga Shizuku.  This is a drip pressed Sake, that is drip pressed in an igloo which the brewery must rebuild each year outside of the normal production facility.  Sake may also be sparkling or aged to bring out different flavors.

Terroir in Sake also plays a role.  In the North and East of the island of Japan, Sake tends to be tight, compact and light, but as one heads South and East, it gets bigger.  This is due in part to the water sources used as that plays a big role in the flavor of the finished product.

As you can see, there are 6 major regions in Japan for Sake.  It is made everywhere on the island, but the 6 major regions are as follows.  First Nada.  One third of sake in Japan comes from Nada.  Nada benefits from good water and a port which makes shipping easier.  The Sake from this region are sturdy yet feminine.

Second is Fushimi.  Fushimi also makes a more feminine product.  In the city of Kyoto, it is not far from Tokyo and easily accessible to ship by train.

Third is Niigata.  Snowy, with lots of mountains and known for high quality rice,  this is the Burgundy or Bordeaux of Japan.  It makes very good dry Sake, and due to a high number of master brewers of Toji, it is sought after Sake.

Fourth is Akita.  Akita used to be a mining town, and it has converted to a Sake town due to high quality rice.  This is tight sake with great balance.

If you can get past the glowing in the bottle, Hiroshima is 5th.  (Kidding of course)  Soft water allows for great soft, sweet and balanced sake.  This is the region that has also lead the country in adopting technology.

Finally, Fukushima too has great rice and water.  These are soft and light wines.  Subtle flavors, but styles vary vastly in this region.

So maybe now, I will be able to do a little more than guess on the menu.  Hopefully you will too.  By the way, there is one more thing you should know.  It is not good form to pour your own Sake.  So make sure to pour for others first, and let someone pour for you after.  It is bad luck or something.  If you are ordering Sake, you may need all of the good luck you can get.

As for how I started, blue cheese pairs well with Sake too.  Who knew.

Posted by wineawaywhine at 11:39 AM