I went to get a quick workout in this morning, and, as I frequently do on the elliptical machine,  I listened to a podcast on wine.  Which podcast is unimportant, but it was one of my usual suspects.  About half way through, the hosts began talking about the issue with consumers being overwhelmed by wine.  The premise put out by the two hosts was that, "Wine is still Mysterious to people and we have to solve the mystery."  I loved that quote.  After all, is that not why we desire to be Sommeliers in the first place.  Our job is not to memorize esoteric facts about grapes, regions, and weather.  Our job is to educate, and pair the right bottle of wine with the right person at the right time.  So far, I have no issue.  However, I went on listening.

The next thought that came out of the podcast was in the form of a question, "Is that even a problem that can be solved?"  WAIT A MINUTE???  Can we make people fly?  Can we cure Cancer, Can the Cubs win the World Series?  These are problems that cannot be solved!

Wine, and the education of people who are curious about it, is most certainly a problem that can be solved.  How you might ask?  Well, I am going to tell you.  I can think of at least one example today. 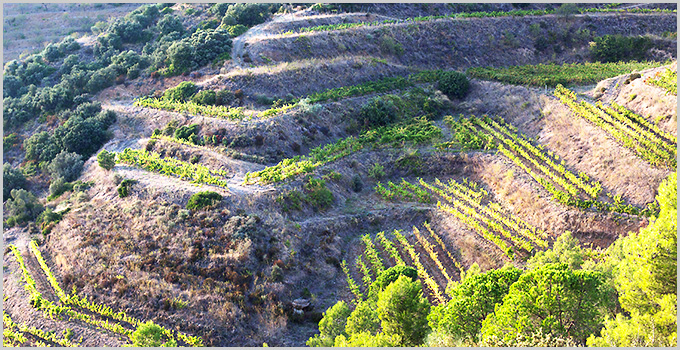 Sit back, and listen to a little tale, a tale of a faithful ship...Oops, wrong tale.  A tale of a small wine region in Spain called Priorat.    Just 20 years ago, the wines of Priorat were not on anyone's radar.  In fact, because it was expensive to farm the steep cliffs, and all farming had to be done by hand, and the reputation of the region was not warranting big price tags for the wines, many farmers just abandoned their vineyards.  They just moved away, leaving the vines to grow.  Abandoned, cold and lonely these vines did what any vine would do, they dug their roots deep into the soil and continued to grow.  They went wild, and about 20 years ago, new winemakers showed up.  They invested money into the region.  They used good vineyard management.  These new wine makers implemented new technology, and soon they were making among Spain's best wines.  Priorat is one of two DOCa regions in Spain (The other Rioja), and yet, many people still do not know about it.

They don't know that these are big wines that tend to be fruit forward.  They tend to have big tannins, they tend to be high in alcohol.  They tend to drink like New World Wines in a lot of ways.  They will have black fruits and some spice.  We can bore people with the details that I just went through, or we can tell them, if you like your big, fruity, California Cabernet, and you tend to go that way, try this wine.  I think you will like it.

This is precisely why Australia has been so successful.  Brand Australia is good, easy to drink, enjoyable, fruit forward wines.  Ultimately, there is good quality for the money, and people like them.  What?  People like them... There is certainly no mystery in that.

I think wine stays a mystery in part because we continue to tell stories to mystify.  We are both the solution and the problem.  Because in the end, there is only one thing that matters when you think about wine and people.  Do they like it?  Not should they like it?  Not that it has a hint of salinity which matches well with oysters (Which I don't eat anyway), not even that it has black or red fruit, or big tannins or high acid.  Most people just don't care.  They know what THEY like.  We need to listen to what THEY like.  We need to find wines that are similar to what they like and slowly expand their horizons by saying, If you like California Cabernet, try this...  That will allow them to learn what they like and order it again.  People learn through their experiences, and we need to create those experiences for them.

We should take a page from the book of the beer makers and tell people that wines has the same number of calories as light beer, but it tastes better.  The story is great, and putting  wine on a pedestal is fantastic when you are geeking out with wine friends.  Ultimately, though, our role is to remove barriers, reduce the mystery and to sell more wine. Stop complicating the hell out of it.  :)
Posted by wineawaywhine at 1:20 PM No comments: