Wander into a French Restaurant anywhere in the world be it France, or Highland Park, Illinois USA, if you know wines and what goes well with provincial cafe food, you are likely to order a Cote.  Not a COKE, but a Cote.  If you are in-the-know this is the way to indicate to the server that you would like a Cote du Rhone.  These wines are Ubiquitous in french cafes and are generally a nice value wine.  With that, comes the wonderful reputation of being average at best cafe wines.  They won't excite or offend anyone.  While this is true for many wines in the region, the Rhone Valley goes way beyond the Rhone hills, and offers both great values as well as exceptional, interesting wines that people are happy to sit and talk about forever, and ever.

I remember my first experience with the Rhone valley beyond Cote-du-Rhone.  I was in, of all places, Napa Valley and we decided to head over to a restaurant called Tra-Vigne where a young and interesting hot-shot chef was doing some incredible things.  The chef's name is Michael Chiarello, of TV fame, but this was before all of that.  My wife and I ordered a paparradelle with a lamb ragu that was screaming for a glass of wine.  When the Sommelier came over to chat, he said: 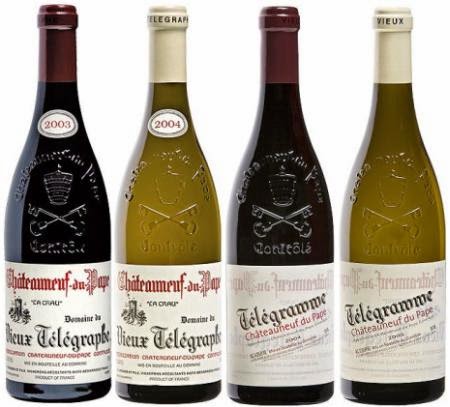 Me: "Wine guy, are we to young for you to be a sommelier?"
Brian: "nope, I am too young..."
We all laughed, and we told him that we would not be having wine with dinner because we had been drinking CA wines all day.
Brian:  "What I am hearing you say is that you don't want anymore California wine today, and you don't want a lot of any wine, but I cannot let you have that pasta without any wine at all.  That would be a crime!"

God Bless that man.  he was right.  What he brought us was an old Vieux Telegraphe Chateauneuf du Pape half bottle to go with dinner.  He said it was a wine-nerd's wine.  Brian told us that he and his buddies spend hours pouring this wine and sipping it, watching it change in the glass, and debate its flavors and smells over the course of the evening.  IT WAS GREAT.  I had never had anything like it.  I did not even know it was from the Rhone Valley.  I just knew I wanted more of it.  More on Chateauneuf in a bit. 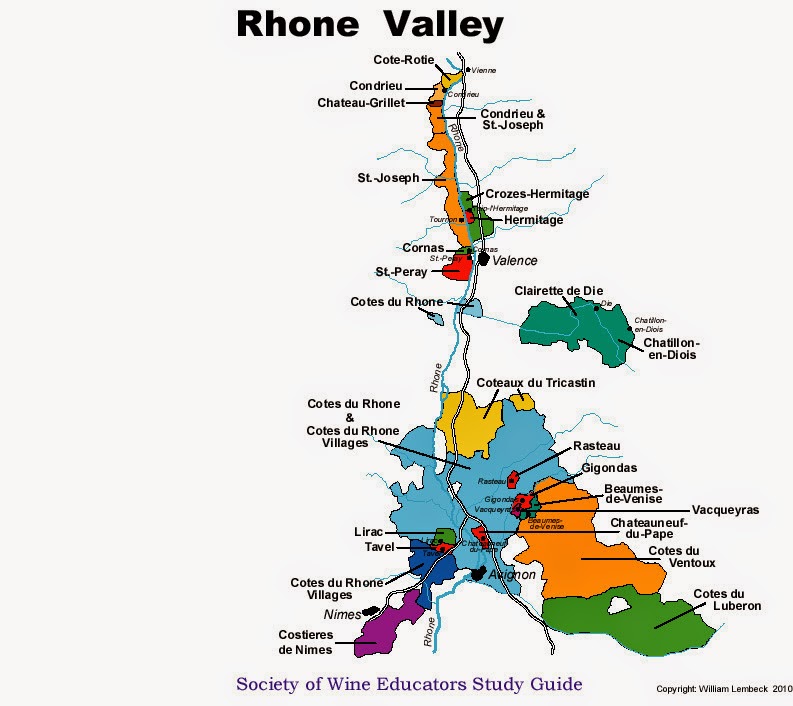 Back to the Rhone.  It can easily be separated into the Northern and Southern Rhone.  The two regions do not touch at all in fact, and if they did not share the same river aptly named the Rhone, they would likely be considered two totally separate AOPs.  Geographically, they are separate, They grow different grapes, the soil make up is different, and the climate is vastly different.  Finally, the North makes some of the best wines of the region, but only accounts for a paltry 5% of the total yield.

Lets take climate first.  The north is more of a continental climate.  The North has more varied seasonal change, a lot more rainfall, and fewer daily hours of sunlight giving the grapes longer hang time.  The Northern Rhone also has strong winds called Mistrals that blow so hard that many of the trees in the area lean southward due to the wind's strength.  While this can strip the vines of their fruit, it also serves to ensure that the rains do not bring with them mold or rot.

The soil of the northern Rhone is made up of Schist and granite.  Many of the vineyards are on hills that hug the river, and almost defy gravity in their ability to stay up.  The three AOPs with the steepest slopes and therefore the best wines are Hermitage, Cote-Rotie and Condrieu.

The top grape grown is by far Syrah.  Many feel there is no better Syrah anywhere in the world then in the norther Rhone.  These wines are full-bodied, savory and have flavors of Meats, smoke, olive, lavender and peppercorn.  Some say rubber and cigars as well.

Cornas AOP bottles Syrah as a 100% varietal wine while the other appellations allow a small percentage of white grapes to be blended in.  Ironically, those white grapes deepen the red color of the wine and stabilize the tannins.  Cote Rotie will add up to 20% Viognier (One of my favorite white grapes) while the remaining areas add Marsanne and Roussane.  These grapes are almost always co-fermented in whole clusters and many times include stems.

At this point I think it is worth recognizing some of the communities in the Rhone.  We will start in the North with Cote Rotie (Burnt Cliffs).  These are the steepest vineyards of any in France.  I am not sure if it is called the burnt cliffs because of the sun, or because of people falling down and leaving blood in the soil.  At times the gradient is 55 degrees or more, and all of the cote's vineyards are harvested by hand.  Talk about a hard day's work.

The Cote-Rotie is broken into two parts, the Cote Brune (Brunette) and Cote Blonde (I will assume you can translate), allegedly given to the two daughters of  some important dude.  One blonde and one brunette.  Some say the soils are darker on the brunette side.  Most importantly, the Blond side makes lighter more elegant wines, while the brunette side makes more assertive, bolder wines.  This area rivals some of the first growths of Bordeaux in their beauty and complexity.  La Mouline, La Turque and La Landonne are among three of those places.

Hermitage, so named because of a Hermit who lived in a chapel in the area, is another community worth noting.  They also make an exceptional Syrah blended with up to 15% rousane and Marsane grapes, as well as a beautiful white from Rousane (Acid) and Marsane (Richness, think Marzipan).  there are 4 producers who dominate the area.  They are Negociants Delas, M. Chapoutier, Jaboulet, and Jean-Louis Chave who is the only major grower who bottles his own wine.  (This part is thanks to my friend Jim)  If you don't want to pay Hermitage prices, you can also seek wines made in its little brother AOP called Croze-Hermitage.  These wines are less predictably great, but the great ones take Syrah into the bacon flavored realm, and who would ever say no to bacon.

Cornas is famous because they only allow Syrah in their wine.  No blends here.  These are wines that need to be laid down for years.  They are almost unapproachable in their early years.  Also notable is that Cornas is the warmest region in the north due to the hill shielding it from the Mistral, and the fact that the land is made largely of uncovered granite (Gore).

St-Joseph is a lesser region in the north so I am going to skip it.

Condrieu AOP is a white ONLY region.  As I mentioned before, right now my favorite white is Viognier.  Condrieu is just south of the Cote Rotie.  The wine is Honeyed with a lusciousness and finishes with a floral bouquet.  It is finished with Oak, and MLF to give a creaminess to the winemakers taste.  Sometimes people will say that Viognier is the more interesting, sultry sister of Chardonay.  Graaaaaaawwwwwwllll.

Clairette de die provides 2 types of sparkling wines, method traditionnelle (See how Champagne is made) and Methode Dioise Ancestral which must contain 75% Muscat a Petit Grains (Weird grape).  They are bottled before fermentation is complete, disgorged, and hit with a dosage of 35g/l making it a semi-sweet wine.  Traditionnelle is basically Brut in style.

Chatillon-en-Diois makes Gamay based reds, rose's and whites from Aligote and Chardonnay.

Moving to the Mediterranean climates of the southern Rhone, a lot shifts.  First, it is WARM.  One can dream as it was -7 degrees Fahrenheit today when I woke up in sunny Chicago.  The vineyards fan out from the river and cover far more geography.  Granache is the predominant grape but Mourvedre and Syrah also play their parts.  Some communities allow for up to 19 different grapes in the blends that they produce.  Unlike the north, this is a region that relies on the blend to make a balanced and beautiful wine.

The mistral blows so strong through the south that some farmers are forced to plant the vines on an angle.  The soil is made of deposited limestone over sand, gravel, and clay all left by the river over the years.  Finally, large stones are found in some of the region called Galets, and are most notable in Chateauneuf-du-pape.  These Galets were deposited in the ice age by the glaciers and they are thought to store heat for the cool nights.  This may account for the high alcohol content of the wines in the region.

I will break the region into a few parts.  First, we will start with Chateauneuf-du-pape (Chateau of the new pope)since it started my love for the region so long ago.  7 notable producers make some of the best wines of the region.  Chateau Rayas, Chateau de Beaucastle, Michel Chapoutier, Domaine du vieu telegraphe (Mmmmm), Chateau La Nerthe, Domaine Charvin, Domaine de Marcoux.

The region produces both red and white wines and has 13 accepted varieties to blend from.  Grenache is usually the principal variety in the red wines of the region, however, Chateau de Beaucastel Rouge is dominated by Mourvedre and uses every one of the authorized varieties.  Chateau Rayas is almost always a 100% Granache.  The minimal ABV in Chateauneuf is 15.5% with many reaching 15% or higher.  Giddeyup!

Gigondas is similar to CDP, and a lot cheaper, as is Vacqueyras.  Both of these villages used to be part of the generic Cote-du-Rhone AOP.

Cotes du Rhone AOP is the largest appellation.  Over 2/3 of the production of the Rhone is produced in this AOP.  It is also the wine I discussed at the beginning that is found all over the restaurants and cafes of France.Cotes du Rhone Cillages AOP is a superior designation for red, white and rose wines from a smaller area within the Rhone.  There are 18 appellations that attribute their designation the the CDR-Villages AOP.  Major grapes grown here include Grenache, Mourvedre and Syrah.

Beaumes-de-venise and vinsobres AOP are new appellations that joined in 2005 and 6 respectively.  They produce a wine that has a minimum of 50% Grenache with high alcohol.  Lirac is a small community with a dubious past.  They produce medium quality white, red and rose wines, but in 1863, Lirac is thought to have been the gateway for phylloxera getting into France.  Phylloxera is a devastating parasite that wiped out many of the vines of France.

Tavel makes only rose wines made from Grenache.  These wines are dry and said to be age-worthy.

Clairette de Bellegard makes wines only from a grape called Clairette and is known basically for that region alone.  Talk about marketing.


There are other small regions, but I will not go into those right now.

All-in-all, the Rhone Valley has wines that one could drink every day.  They are good, affordable, and go with most foods.  In a country like France, they are the go-to wines.  More interestingly, there are wines that are unforgettable.  Wines in the north from Cote-Rotie, and Hermitage as well as Condrieu.  And in the south, Chateauneuf-du-Pape among others.

Explore.  It is only wine.

Posted by wineawaywhine at 12:13 PM