Perhaps one of the most fantastic vacations I have had the pleasure of going on in my lifetime was a trip to Florence, and a stay in Radda in Chianti.  We stayed in an old manner house in a medieval town.  The town was nestled into the hills, and the words, "Go straight" to a driver had no real meaning.  Way up in the mountains, overlooking the valley below.  The sun casting shadows from the few clouds that floated bye.  Tuscany is beauty.  It is the birthplace of the art world as we know it today, it is home to some of the most beautiful and simple food that the world has to offer, and it is the home to some of the best olive oil and vinegar (Aged Balsamic).  It is also the home to Chianti Classico.  To understand Italy, and it's people, one must simply sit in a wine bar, or a enoteca (wine cafe) with a glass of Chianti, some bread, and a plate of food (Whatever they suggest that day).  Food is Italy, and food is never served without wine.  A meal without wine in Italy is called breakfast, and I really do mean that.

On day 3 of our trip, after buying some expensive bottles of wine, a very nice server walked over to our table, and said, "you know, you don't have to do that."  Do what? said we.  She said, "Buy expensive wines in Italy."  Why?  The local "house wines" were fantastic, and at 12 Euros a bottle, much less expensive than the stuff we were ordering.  It is what the locals drink, and it was great.  They were proud to display it, and proud to serve it, and we were all too happy to drink it.

So, lets talk about the wines of Tuscany shall we?  One cannot discuss Tuscany without Sangiovese, a grape that is so elegant, and yet so misunderstood.  Why?  Because it used to be served in America as Chianti,  in a bottle called a Fiasco.  These are the bell bottom bottles with wicker baskets on them.  The wine in Fiascos is NEVER good, and thus, that was the thought of Chianti in the United States.  Too bad really, because Chianti is great, and Sangiovese is the grape that makes it so.

There are 11 DOCGs in Tuscany including Chianti Classico.  The other red DOCG that gets a lot of street cred in the world market is Brunello di Montalcino DOCG (Thought to be among the best wines in the world), Carmignano, Chianti (Note that all Chiantis are not Chianti Classico), Elba Aleatico Passito, Montecucco Sangiovese, Morellino di Scansano, Rosso della Val di Cornia, Suvereto, Vernaccia di San Gimigano, and Vino Nobile di Montepulciano ( A beautifully rustic red).

Brunello di Montalcino wines are made from 100% of a clone of Sangiovese called Brunello, and must be grown in the Montalcino region.  Brunello must be aged a minimum of 2 years in wood, plus another 4 months in the bottle.  They may not be sold until 5 years after the harvest on January 1.  Thus, the 2010s are just hitting the market now in 2015.  Brunello Riserva must spend a minimum of 2 years in wood plus 6 months in a bottle, and cannot be sold until 6 years following the harvest.  So the 2010s will come out next year in 2016.  Additionally, due to the long cellar times, producers of Brunello may also produce a little brother wine called Rosso di Montalcino which is less tannic and often more approachable young.  Therfore, Rosso only needs to be in the cellar for 1 year prior to release, and only 6 months needs to be in oak.  These wines are lighter and fresher and 1/3 to 1/2 the price of a Brunello.  There is good wines to be had in the Rosso category as well.

Carmignano is another Sangiovese based red that must contain at least 50% Sangiovese but also has french varieties like Cabernet Sauv and Cab Franc (Up to 20%), and a host of other grapes like Toscano, Malvasia (White) Canaiolo Bianco (White) up to 10 percent. 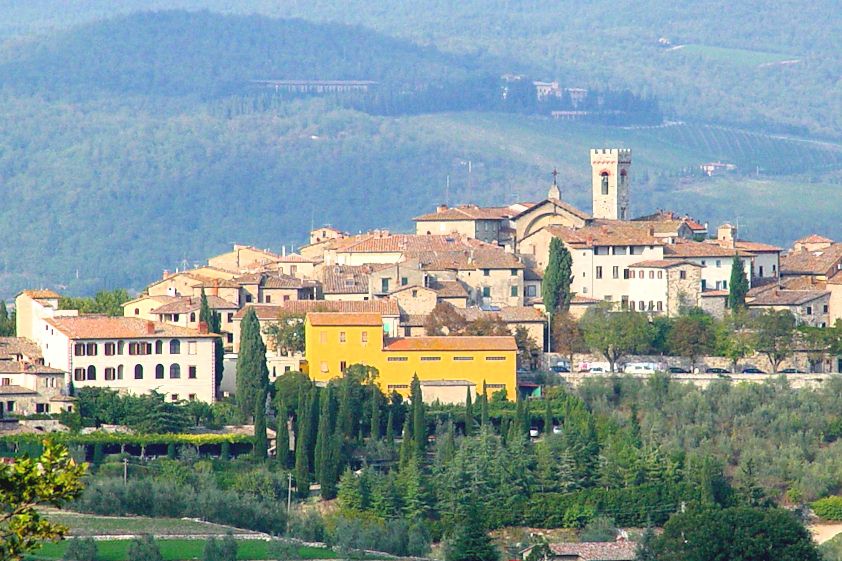 Chianti Classico and it's big brother Riserva are grown between Florence and Siena.  Chianti Classico used to be limited the amount of Sangiovese that they included in the blend to 80%, however, that requirement has since been lifted, and many wines are made with 100% Sangiovese.Traditional blends included white grapes like Trebbiano and Malvasia Bianco, but they are no longer alloud since 2006.  Chianti Classico must have 12% ABV, and be aged 1 year, Riserva must have 12.5% alcohol and be aged 24 months and 3 months in the bottle, and Gran Seiezione wines must be produced from estate fruit, contan 13% ABV, and aged a minimum of 3 years.

Chianti DOCG must have 70 percent or greater Sangiovese.  They are alloud up to 10 percent white grapes and no more than 15% Cabernet Sauv or Franc.  The Chianti Senesi must be greater than 75% Sangiovese, can no longer have white grapes after 2015 (Up to 10 percent until then) and no more than 10% of the cab cousins Franc and Sauv.   Depending on the region there are different ABV requirements ranging from 11.5% up to 12.5%.  All must be aged for at least a year with the Reserva being held back for at least 2 years.

DID YOU KNOW:  In days of old, Tuscany invented a technique called Governo in which they dried some grapes and held them back from the initial fermentation.  If the yeast got stuck, they would add these high sugar raisins to the must, and it would help kick-start fermentation again.  Temperature controlled tanks did away with the need for this technique, however, some winemakers still use the technique by choice, especially with grapes like Verdiccio which can be bitter.  Governo helps to counteract the natural bitterness of the grape.

Back to the program.Elba Aleatico Passito is made in Livorno.  This is made from 100% Aleatico after air drying causing a very high sugar content (30%).  The ABV must be over 19%.

Morellino di Scancano is produced with Cabernet... Kidding... SANGIOVESE at 85% or greater.  These wines have a min alcohol of 12.5% and the riserva at 13% Abv.  They must be aged for 1 year and the Riserva for 2.

Val di Cornia Rosso is another Sangiovese blend, but this one only requires 40%.  Minimum Abv is 12.5, and 13% for the Riserva.  It must be aged for one year, with Riserva aged for 18 months in oak and 6 months in the bottle.

Suvereto is actually made from Cabernet Sauvignon and or Merlot plus a max of 15% other red grapes.

Vernaccia di San Gimigano is a funny wine in Tuscany for two reasons.  First, it is a WHITE wine.  Second, it is a white wine grown in the most macho of places.  The town is built of Medieval skyscrapers to scare away its enemies.  This is the town that produces white wine... Irony.  Vernaccia is the grape but they do allow up to 15% other white grapes.  It must be 11.5% alcohol or 12.5% for the riserva.  This wine is aged a minimum of 11 months including at least 3 in the bottle,

Two other notable wines from Tuscany include Vin Santo and Super Tuscans (Which have absolutely nothing in common but that they are left to discuss)  Vin Santo, or wine of the saints, is made from partly dried grapes and aged in small wooden barrels.  It is made mainly of Malvasia and Trebbiano though some can be made from Sangiovese as well.  It is a beautiful age friendly wine often served at the end of a meal.  The flavors of almond, and orange, honey, and a bit of oxidation are always present.  It is the perfect way to finish a meal.  Frequently, the Italians have Vin Santo with Biscoti and they dunk the cookie into their wine.  It is a marriage made in Italian Heaven.

The last wine I will discuss in Tuscany is the Super Tuscan (So named by Americans)...  Tuscana wines emerged out of Italy as a revolt of sorts.  I know, wine and war should not go together, but sadly it does.  In 1970 a group lead by Sassicaia decided that they were not going to follow Italy's wine laws, which should land you in wine jail (I don't know what that is, but it sounds like a place I would enjoy).  The punishment was that these wines had to be called "Table Wines" and did not get their own DOCG.  Death to wine?  NO!!  Instead, it pushed boundaries, and produced better Italian wines garnering a price premium.  Later followed Tignanello with a blend of Sangiovese and Cabernet Sauvignon.  Today, Super Tuscans can be a blend of Cab, Merlot, Pinot Nero, and even Syrah.

Castelli di Jesi Verdicchio Riserva must contain 85% Verdicchio and achieve 12.5% abv.   It must be aged 18 months including 6 months in the bottle.

Conero is a red from Montepulciano but may contain up to 15% Sangiovese with a minimum abv of 12.5%  These wines are aged for a minimum of 2 years.

Offida makes both a red and white wine.  The white is made from Pecorino (or Passerina) while the  red made from Montepulciano.  The whites must have 12 percent alcohol if made with Pecorino or 11.5% abv if made with Passerina, while the reds have a min of 13 percent.  Red wines must be aged for 24 months including 12 months in wood and 3 in the bottle.

Verdicchio di Matelica Riserva is a bitter wine made from 85% Verdicchio.  It must have 12.5% abv and be aged 18 months.

Vernaccia di Serrapetrona is made from Vernaccia Nera and is a sparkling red (Rosso Spumante) and can either be dry or sweet.   It must have a minimum of 85% vernaccia Nera and 40% of the grapes must be dried.  It may not be released until June 30th the year after harvest.  It can be made both in the traditional method (Seldom, or the Charmat method.

Lacrima di Morro d' Alba is a red wine not unlike Pinot noir in its nose.  It is very aromatic and smells of Roses, boysenberry jam.  It has nice acid and  soft tannins.

This is a country full of great wines.  Try them.

Posted by wineawaywhine at 8:33 AM