In addition to taking this great class on wine, I have bought a book.  If you are interested in anything I rant about here, I highly recommend it.  The book is aptly called the Wine Bible, and it is by Karen MacNeil, who I believe is a master sommelier, and is a fantastically engaging writer.  McNeil's book like the class appropriately starts with France as the center of the wine making world.  Unlike the class, she starts the story off with Bordeaux.  On page 112, McNeil begins to share with her readers the wonder that is Bordeaux, her discussion continues for pages, and pages finally finishing on page 160.  No other wine region anywhere in the world gets as many pages devoted to it as this region.  Why?  Well, it is not uncommon for the finest wines from the finest vintages to sell for prices generally reserved for fine works of art, cars or homes at auction.  Besides the wines, the history of Bordeaux is long and very wine-centric.  Finally, wine laws that set up the concept of AOC/AOP started as a means of establishing a system for informing consumers the quality of the wine from the region by allowing them information about the place (Terroir) that the grapes were grown.

Bordeaux is the most influential wine making region in the world.  The goal of the top growers is to use place, combined with blending of grapes to produce the most complex, and age-worthy wine anywhere in the world.  It is also the largest vineyard space producing fine wines anywhere in the world.  Bordeaux produces over 700 million bottles of wine per year.  Given that the price of many of these wines is so high, France makes a pretty penny or Euro as the case may be, off of this region's bottled bounty. 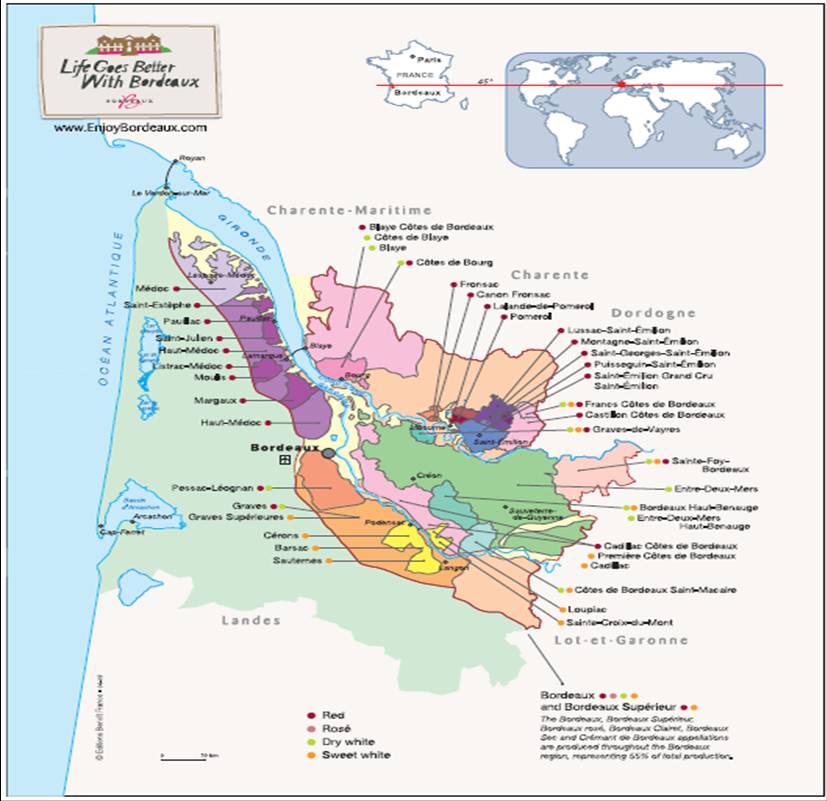 Looking at the map of the region (Right), which if you think about an anatomical model that would be in a doctors office, looks like a woman's nether-regions if she was standing on her head.  The opening of the birth canal is the Atlantic ocean and the birth canal is the Gironde river.  Sorry if you did not want that picture in your head, but I did study reproductive biology in a past life.  Also, I am right...and funny.  More on the funny thing later, this is a very serious region.

Typically people talking about Bordeaux talk about it as being split into two halves.  The most important of these halves is the Left Bank.  I bet you could have guessed that the other is aptly called the Right Bank.  Bordeaux produces whites, reds, rose's, sparkling wines, but nearly 80 percent of the wines that come from the region are red.  The best wines in the region are in the left bank, and all of the first growths reside on that side of the river, however, good wine can be had on both banks.

We will start with the left bank which is represented on the left side of the river if you look at a map.    The most famous part of the region is the Medoc.  As you travel up the river within Medoc, you will find that it is broken into many sub-regions.  Starting at the top with perhaps the most clever named region MEDOC or Bas-Medoc, followed by Haut-Medoc, Saint-Estephe, Pauillac, Saint-Julien, Listrac-Medoc, Moulis, and Margaux.  Also Notable in the left bank is Graves and its sub-region Pessac-Leognan, and finally Cerons, Barsac (Just bought a bottle from there today) and the most famous Sauternes know for their sweet wines made with grapes infected with noble rot.

The right Bank is most well known for Saint-Emilion and for Pomerol, and others I will not spend time on here.

The Left bank is a fantastic place to grow Cabernet Sauvignon due to its soil made of mounds of gravel from the Pyrenees mountains.  The Dutch cultivated this soil back in the day when they were big into the spice trading thing, and left it to the French to prosper from to this day.  This specialized soil acts as a perfect filter and drainage system.  Cabernet Sauvignon loves growing there.  If you travel to the left bank, you will see some smiling Cab vines everywhere you turn.  In addition, the weather is great for the grapes too.  It is a maritime climate with the Atlantic ocean moderating temperature change.  Winters are short and generally frost free.  Summers are warm.  The two issues that can make the happy smiling vines sad are humidity and rain, both of which can cause the grapes to rot.

The Medoc region includes most of the 1st growth (Best vineyards) in the region.  These are growers who were designated as the best in 1855 as making consistently great wines.  They frequently forgo yield, and may cut 35%-50% of the clusters off of the vine to concentrate sugars.  This reduction in yield means that the wines are fantastic due to the maturity and intensity of the grapes.

There are 5 total first growth labels and 4 of them reside in the Medoc region, all of which are in the Haut-Medoc.  Bas-Medoc produces mostly Merlot, but as we travel south to the Haut-Medoc, it quickly becomes Cabernet country for the reasons mentioned above.  Traveling south through the Haut -Medoc, we come to St-Estephe, where the wines tend to be more acidic, and while they are mostly cab based, they grow more Merlot in the area than any other commune in the area. Next is the finest wine making region perhaps in the entire world.  It is called Pauillac.  Three of the first growths can be found in this AOP including Chateau Lafite Rothschild, Chateau Mouton-Rothcshild, and Chateau Latour.  The wines from this region are intended to be aged for years, frequently needing at least ten years before they have started to harmonize.  These wines also get the largest price tag of any other area in the world.  The biggest price tag can be placed on the three chateau listed above.  The wines from the first growth regions sell for thousands of dollars.  They are frankly out of my price range, so don't ask me what they taste like.  I should have married for money, but instead, I am stuck drinking wines that are FAR less expensive.

St-Jullien has some good wine as well, NO FIRST GROWTH wines, but 80 percent of what they produce are Cru Classe.  They have 5 second growths and two of them are  "Super seconds", meaning they are seconds, but good enough that they stand out of the second growths.  These are Chateau Leoville and Chateau Ducru-Beaucaillou.

Margaux is the largest AOP of the Haut-Medoc.  They have 21 classified growths, more than any other AOP.  There is one first growth creatively called Chateau Margaux.  These wines are often described as having feminine beauty.  They frequently have a floral bouquet with spice, and a lot of finesse.

The next stop is in Graves.  Graves is know for both its red and white wines.  The soil is gravel and thus the name.  The best wines in Graves are made in the Pessac-Leognan commune, home to another first growth wine Haut-Brion.  Additionally, all other cru classe wines that are produced in Graves can be found in Pessac-Leognon.

The final area of note on the left bank is Cerons, Barsac, and Sauternes all of which produce a semillon, sauv Blanc and Muscadelle based botrytis infected sweet wine (Noble Rot)- Which by the way is a good thing.  These are exceedingly expensive, and are only made in years when the fungus cooperates.  These wines produce thick, honey, apricot, and citrus flavors with hints of acacia.  Wines from this region are destined for better things the longer you can keep them.  They get creamy and beautiful with age.  Also note, that unlike many sweet wines, the acid in these allow for a fantastic balance.  Don't fear the sweet wines.  We are not talking blackberry kosher.  These are big wines often served as a counterpoint to rich savory dishes like foie gras (I am not in the mood for the political discussion about the geese).  They taste fantastic, and pair well with the wine.

Let's cross the river shall we.  We are now on the right bank, and I will only touch on two communities over on this side.  The first is St-Emilion and the second is Pomerol.  St-Emilion tries to confuse the world with yet another classification system with their own "Grand Cru AOP"  this is an Appellation, not a commentary on the quality of the wine.  In order to be labled accordingly the wine has to have higher alcohol content.  It is only .5% more though so don't go looking for a party with these wines.

Pomerol is tiny and has sandy gravely clay soils  Merlot is fantastic in these soils.  While Pomerol does not have a cru classe wine, they do have a number of fantastic wines that have achieved cult following.  It is almost like this is where the French go to break the rules.  Chateau Petrus is the most known of these wines.  Also notable are Vieux-Chateau-Certan, Chateau Lafleur, and Chateau Le Pin.  These wines can go for a lot of money despite being cru classe.

There are many other areas of Bordeaux that make a lot of good wines.  White, red, sweet, dry.  They get less acclaim, but many make wines of good value.

Here is the takeaway.  Bordeaux makes good wine.  The best wines come from the following 5 places:


Posted by wineawaywhine at 6:03 PM